According to the groundhogs, we are in for an early spring, which makes for a golden opportunity to assemble in Manitowoc and give our favorite historic submarine, USS Cobia, a thorough spring cleaning and some much-needed maintenance and preservation.  Imagine what your condition would be if you had stayed outside for a Wisconsin winter.  The museum’s winter schedule (closed Tuesdays and Wednesdays) will be coming to an end March 1.   This means that now visitors areas that we can’t normally do are possible when the museum is closed to traffic.

Our schedule will be as follows:  Planned arrival on Monday, February 24, so we can get started first thing Tuesday morning.  Tuesday, February 25, and Wednesday, February 26, will be a beehive of activity tending to Cobia’s needs.  Departure can be Wednesday evening or Thursday morning.  Accommodations are available either on the boat or in the museum, your choice.  Bring your own sleeping bag.  Mattresses will be available.  Continental breakfast and lunch will be provided.  Evening meals will be at any one of numerous local establishments within staggering distance.

For tools, please bring brushes, sandpaper and power sanders, drop cloths, rags, eye protection and the like.  Wire brushes and wire wheels are also helpful as are coffee cans.

As always, all volunteers are welcome and our tasks don’t require being a qualified submariner.  Wives, girlfriends, neighbors are welcome.  All it takes is the desire to aid in the preservation of one of our nation’s historic ships.  Should you wish to help, but are unable to stay for the entire duration, don’t let that hold you back.  Whatever you are able to do will go a long way to keeping her shipshape in Bristol fashion.

If you are planning to come, please drop me a note so we can get a headcount to set project priorities.  I’ll also try to answer any questions you might have and, if I don’t know the answer, I will attempt to lie convincingly.  Hope to see you there.

In September the Historic Naval Ships Association held its annual conference at the Wisconsin Maritime Museum in Manitowoc, Wisconsin.  HNSA is an association of retired historic naval ships spanning 9 countries and is sometimes described as the world’s third largest navy.  The association’s purpose is to share thoughts on the presentation and preservation of these ships and education of the public utilizing these historic vessels as a vehicle to present their stories.  Recognition of outstanding individual performance is given in the form of awards bestowed.  This year 2 of our members (Crash Dive Base) were awarded the prestigious maintenance, preservation and exhibition award.  Ed Dowling (posthumously) and Greg Miller were recognized for their work on USS Cobia. The award reads as follows: “In recognition of your outstanding performance at the Wisconsin Maritime Museum and USS Cobia, the Historic Naval Ships Association hereby bestows the HNSA Maintenance, Preservation, and Exhibition Award.”  Signed by J. T. Willis, President, Historic Naval Ships Association.  Fewer than 10 of these awards are given each year so it is a high honor indeed.

If you would like more information on the Cobia, Cobia’s preservation/restoration activities, or are considering participating, feel free to contact Greg at fourkats4me@yahoo.com or call 630-543-7855. 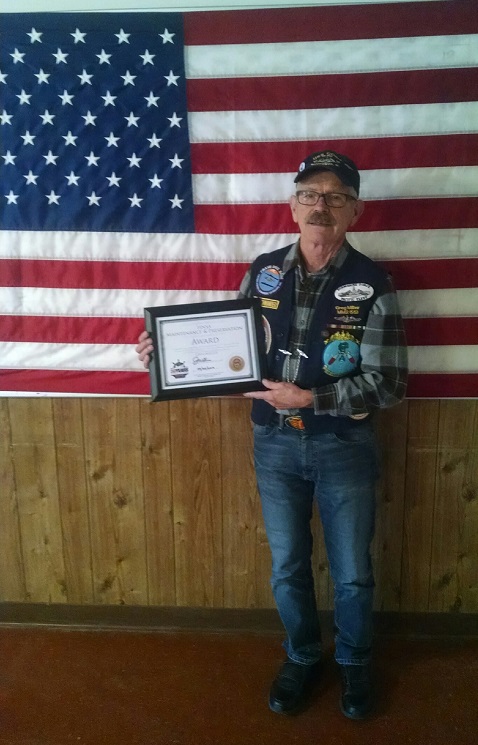 I just wanted to thank you all again for all your hard work on Cobia over the years. Last week’s HNSA Conference was a huge success, and we had so many compliments for our boat. Everyone raved about what great condition she was in and were blown away by how much we’ve restored and maintained. They also had fun “playing” with the engines, torpedo firing, and radar.  All of that is thanks to all your hard work over the years.

Also, congrats to Greg (and Ed) who are the newest recipients of the HNSA Preservation and Maintenance Award! 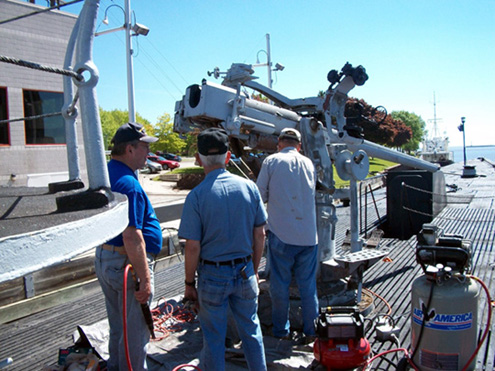 Vice Commander Greg Miller explaining the finer points of a Submarine WTD to the contractor / fabricator, Chicago Scenic Studios, of the soon to be Chicago Submarine Veterans Memorial, which will be placed at the Chicago Riverwalk, near downtown Chicago, Illinois.  See the Memorial page. 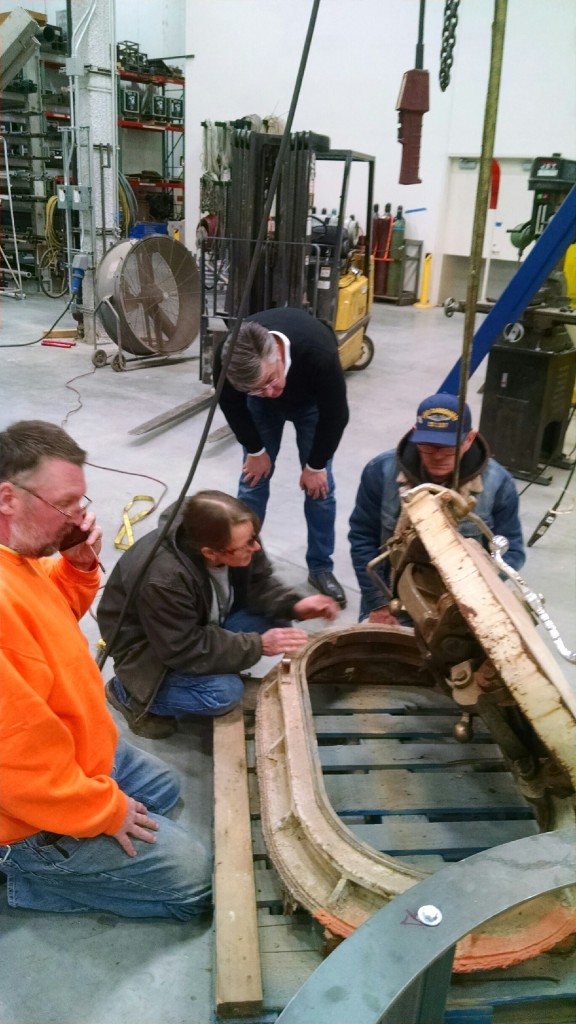 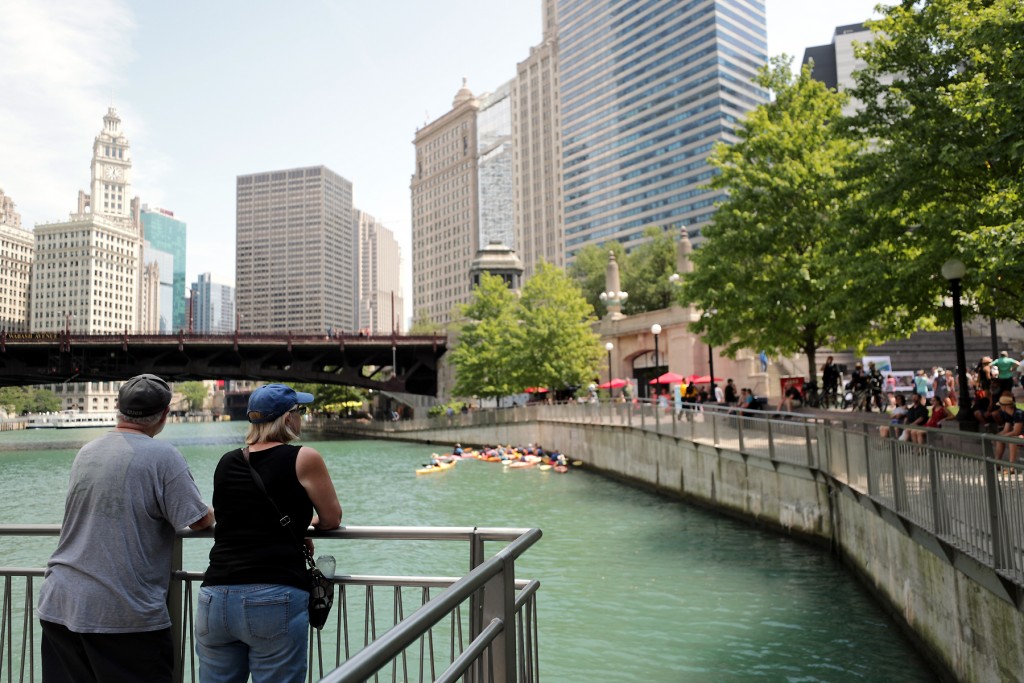 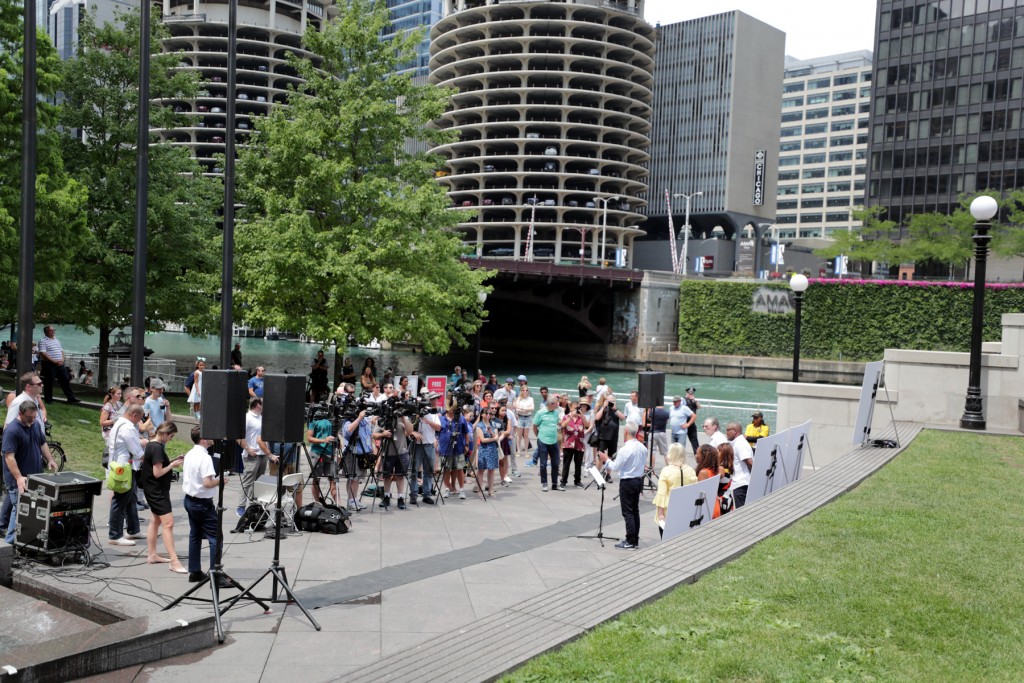 Mayor making announcement about Riverwalk improvements up coming, including our memorial project 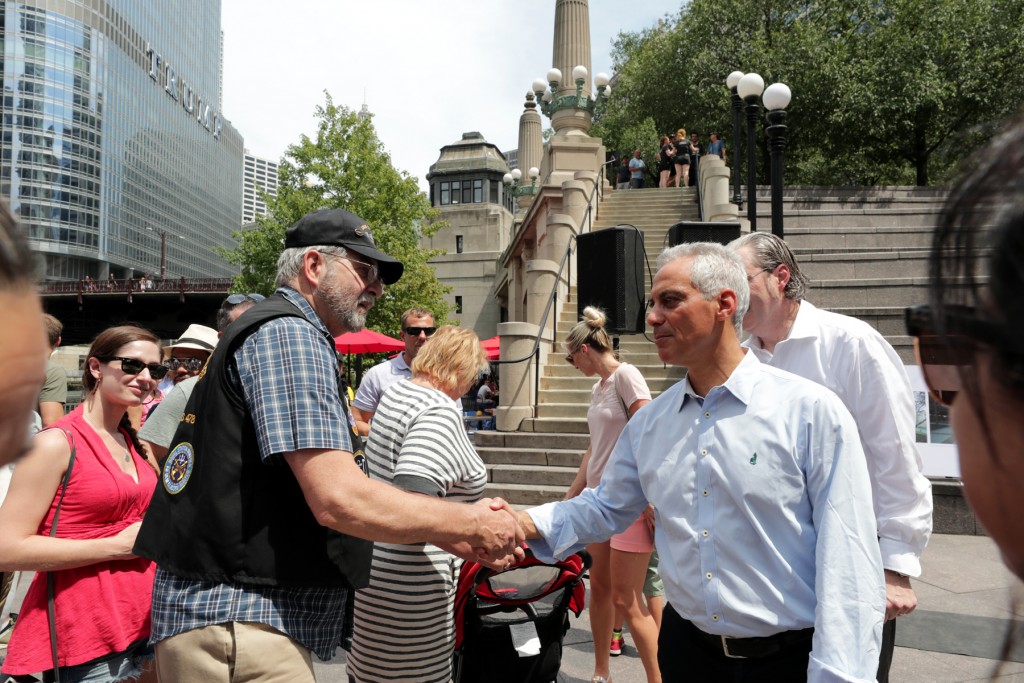 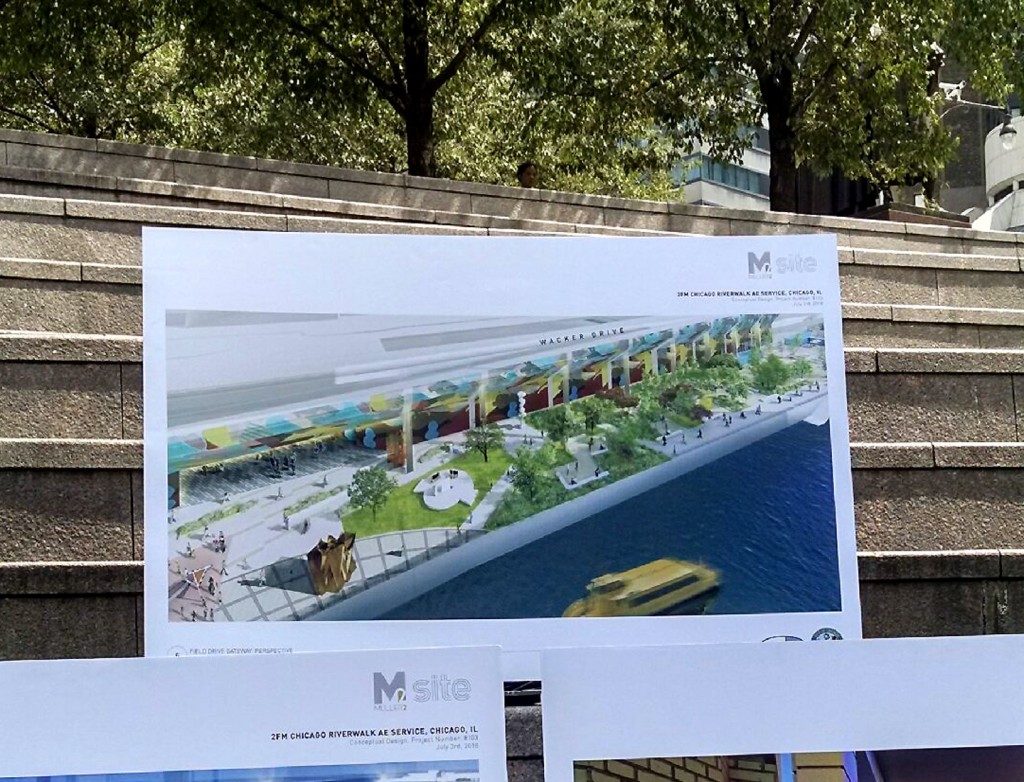 Greg Miller and Frank Voznak, along with their wife’s Mary, and Linda respectively, attended a fundraising event for the WWII Submarine Veterans Memorial in Addison Il. on July 5th, where they met the Governor of Illinois.

The Governor making a cash donation towards the memorial project. He was very interested to learn that submarines were built in Manitowoc WI. during WWII, and came through Illinois on their way to war. Mary Miller & Linda Voznak are in the background. 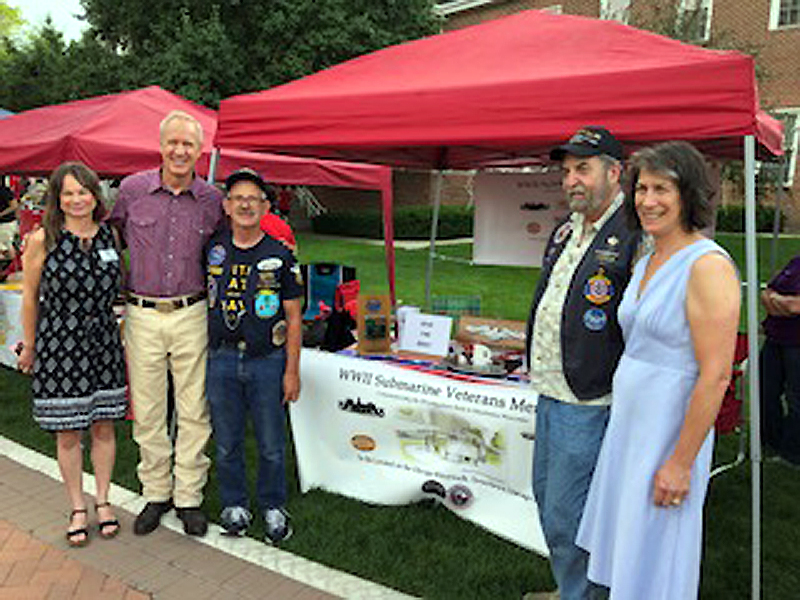 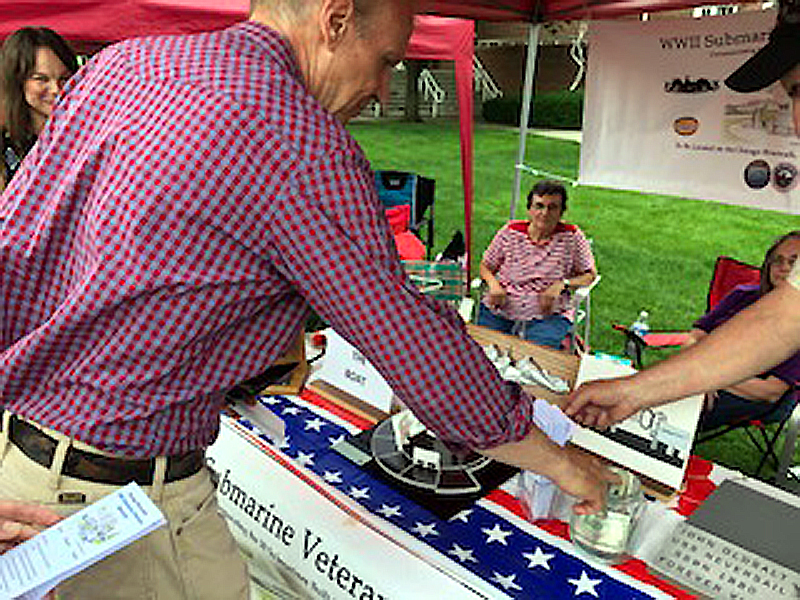 The Governor making a cash donation towards the memorial project. He was very interested to learn that submarines were built in Manitowoc WI. during WWII, and came through Illinois on their way to war. 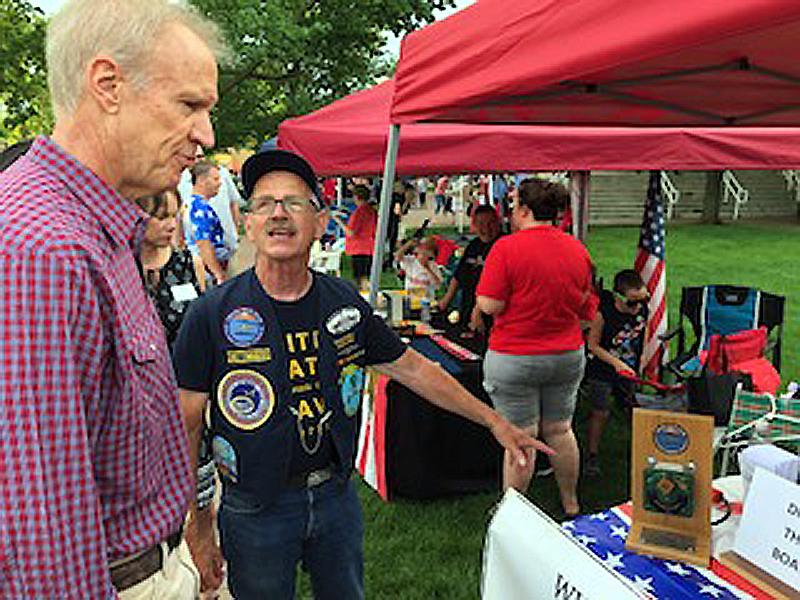 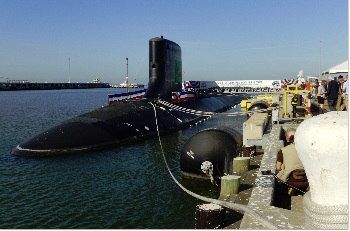 USS Washington (SSN-787) is a Virginia-class submarine. The contract to build her was awarded to Huntington Ingalls Industries in partnership with the Electric Boat division of General Dynamics in Newport News, Virginia on 22 December 2008. This ship is the fourth of the Block III subs which will feature a revised bow, including some technology from Ohio-class SSGNs. Construction began on 2 September 2011 at Newport News Shipbuilding in Virginia. On 13 April 2012, Secretary of the Navy Ray Mabus, announced SSN-787 will be named after the State of Washington, which was celebrated during a naming ceremony in Seattle on 7 February 2013. The Navy christened the ship on 5 March 2016, during a ceremony at Newport News Shipbuilding in Newport News, Virginia, and commissioned this past weekend.
Taken from Wikipedia-

C.A.D.A. (Collectors Arms Dealers Association) is a national association of dealers of the highest integrity who offer quality collector arms for the novice to the advanced collector! Combining the two shows into one event affords something for everyone, for a grand day of treasure hunting!! 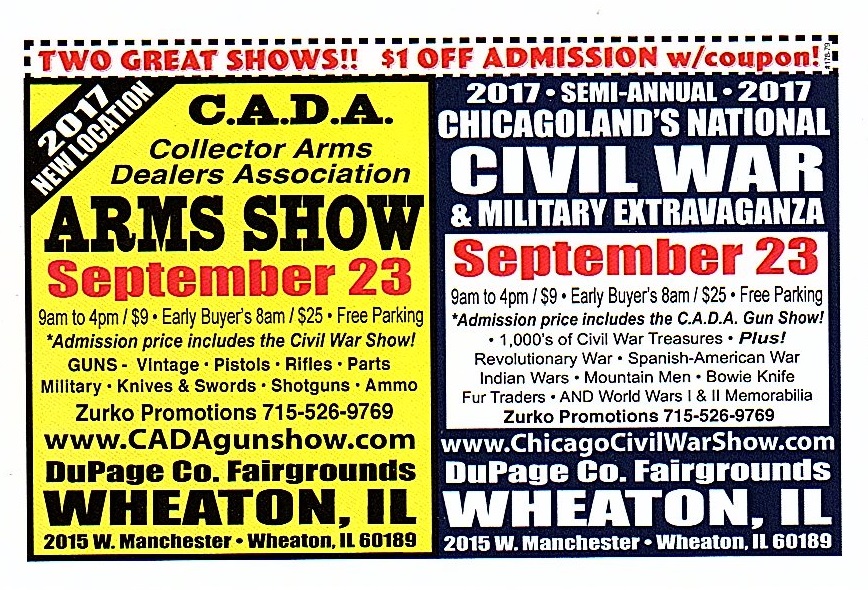 Come and visit us at this show

Visit Crash Dive Base at this event and say “HI”!

Abby Yost and Dakota Didier, left, spend a few moments learning about submarine life with veterans Glenn Barts, holding binder, and Greg Miller during the end-of-summer edition of the Lake County Gun & Sportsman’s Show held at the Antioch VFW Post 4551, 75 North Ave. on Sunday, Aug 27. Miller and Barts were on hand at the show raising donations for the WWII Submarine Veterans Memorial Fund. The city of Chicago has promised to donate land along the Chicago River for the memorial but an estimated $250,000 in contributions are needed to actually construct the memorial. A part of the memorial’s purpose is to honor submarine sailors past, present, and future. Submarines played a vital role in winning WWII. Twenty-eight of these vessels were built in Manitowoc, Wisconsin from 1942-45. A total of 52 subs were lost, taking the lives of 374 officers and 3,131 enlisted men with them. The Lake County Gun Show features new, used, and vintage firearms for sale. Both new and vintage knives, fishing gear, and accessories were also available to shoppers. The event also holds a special raffle held for all attendees 17 years old and under with a parent present with the winner taking home a Henry model H001 .22LR youth rifle. The popular show attracted residents from both sides of the Illinois-Wisconsin border. Organizer Mike Quist of Vintage Arms of Illinois said gun safety and proper training in the use of firearms is a major focus of the event. For more information of on the Submarine Veterans Memorial, visit the Memorial pages this site. 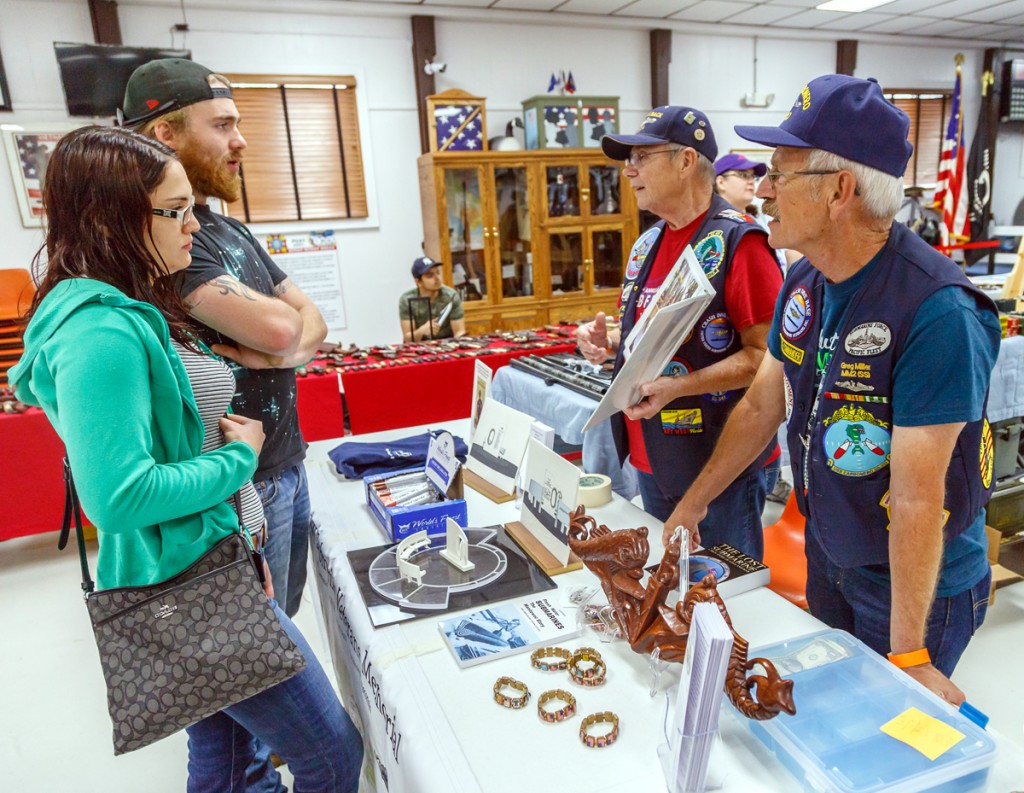 Working for the Memorial

Subfest 2016 hosted by the City of Manitowoc, WI, July 8-10, was a festival to end all festivals. Centerpiece of the fest was USS Cobia (SS245) which is under the loving care of the Wisconsin Maritime Museum. Staff, as well as volunteers, have made Cobia one of the best-kept submarines in the country.
Subvets from all over converged in support of the event as well as to enjoy the festivities over the 3-day weekend. Bases represented included Crash Dive, Wisconsin, Great Lakes, USS Illinois, USS Chicago, Iowa, Peoria and probably others as well. A very touching Lost Boat Service was presented by Wisconsin Base and participating dignitaries included Crash Dive Base former Commander, Ed Potts, who came from Virginia along with his wife, Yvonne, and granddaughter, Kelsey. Good to see old friends again.
Other fest activities included excellent live entertainment, sub sandwich and “torpedo” eating contests, a dazzling water ski show, lighted boat parade, demonstrations of model submarines, fireworks, whistle-blowing engine starts, food booths, sidewalk sales, huge farmers’ market, sightseeing tour boat, subvet-guided tours of the Cobia and more.
Crash Dive members Ed Dowling, Greg Miller, Herman Mueller, and Jon Stines, joined by USS Chicago V.C. Steve Benicke, all suffered bravely while presenting Cobia’s finer points to visitors. Crash Dive Base’s Commander Clay Hill and C.O.B. Larry Warnke were also on hand contributing to the festivities and all shared some not-too-spicy sea stories. Preliminary guesstimates are that well over 2,000 people toured the submarine over the weekend, a new record!
The Maritime Museum graciously permitted use of a space to promote the Chicago Submarine Memorial project to sell candy bars. Special thanks to subvettes Mary Miller, Jan Hill, Yvonne Potts, and Penny Dowling for standing watch and encouraging sales.
This hardly covers everything about Subfest, but in order to fully understand it, you had to be there. To those who participated, much thanks. For those who missed it, we hope to see you at Subfest 2017 the weekend after 4th. of July in Manitowoc.

Special “THANKS” to Subvettes Penny Dowling, Yvonne Potts, Jan Hill and Mary Miller, who manned the Submarine Memorial ‘booth’ inside the museum. From experience, this is a challenging assignment.
And a ‘BZ’ to the crew of the USS Chicago Base, who like wise set up outside and asked for donations to help build our Memorial. Sorry that I do not have any pictures to share. 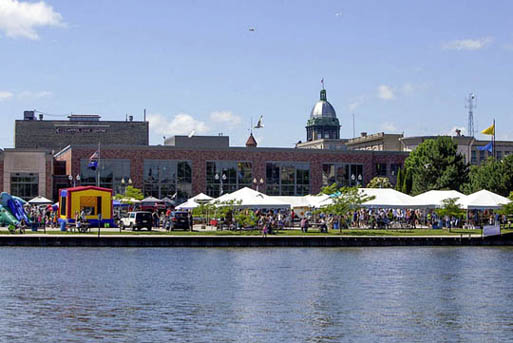 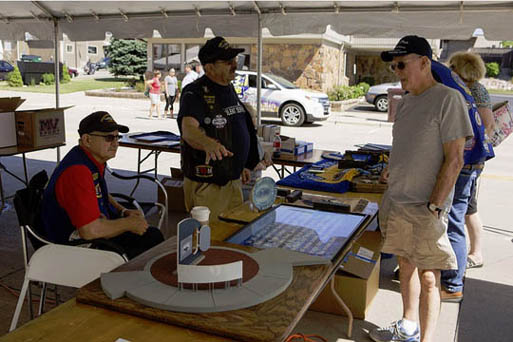 Ken Tupman, USS Chicago Base ‘pushin’ for the memorial

Thanks to all who attended and made this fundraiser a success………… 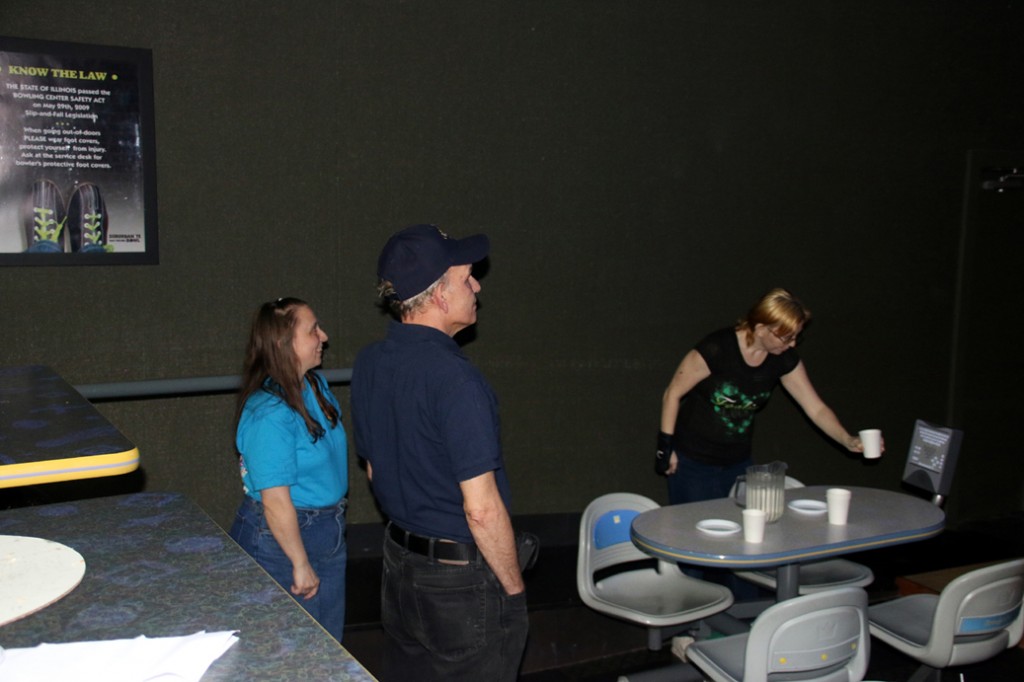 Herman & Team starting the evening off 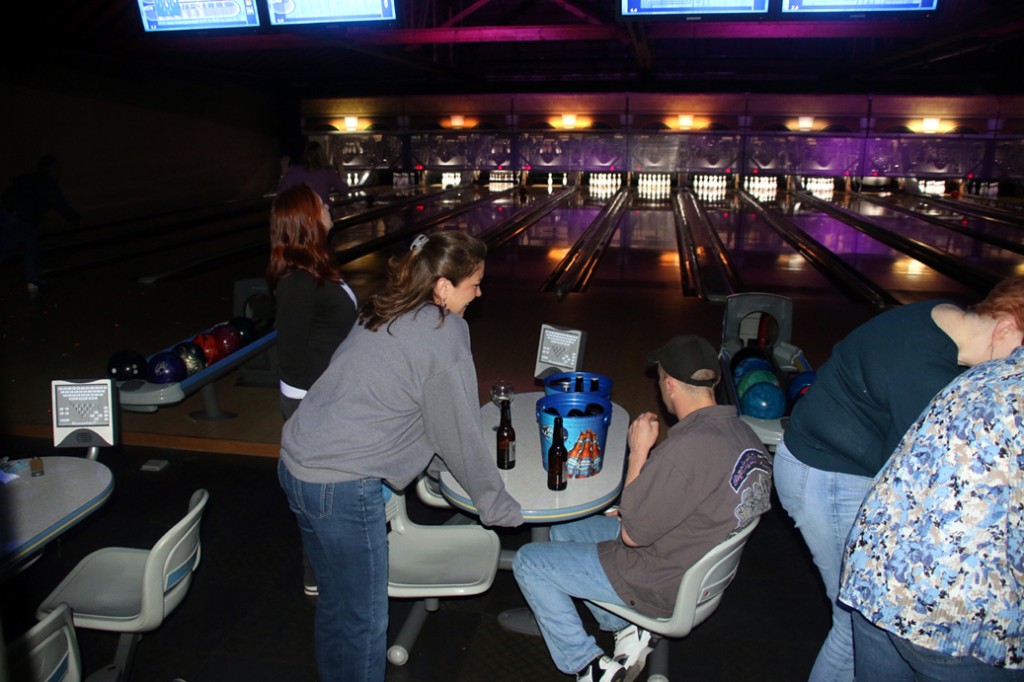 Lining up on the lanes 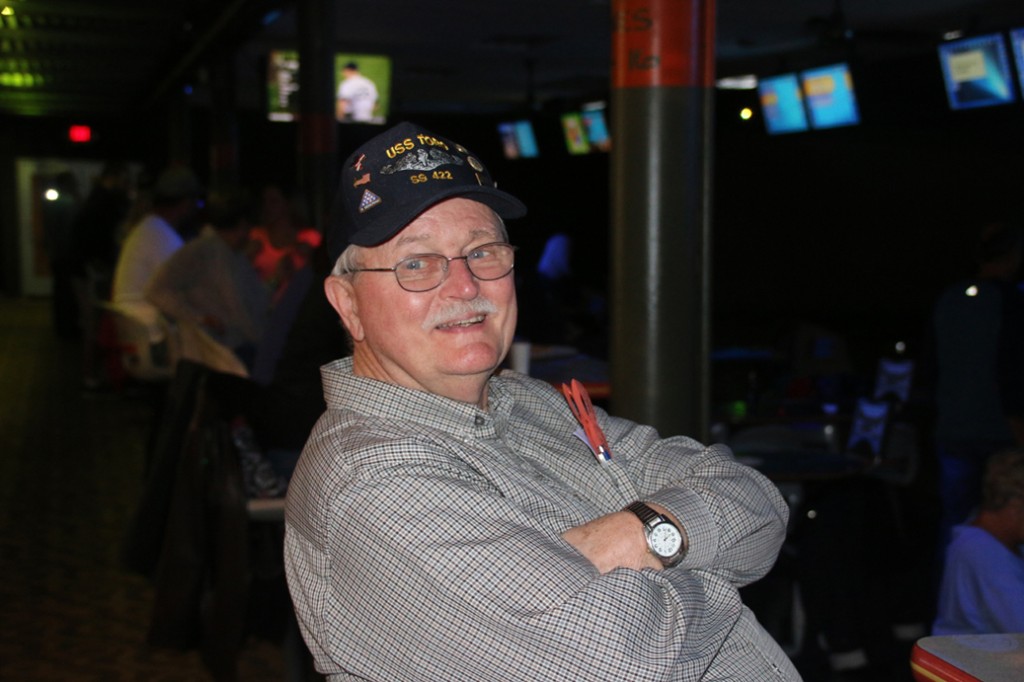 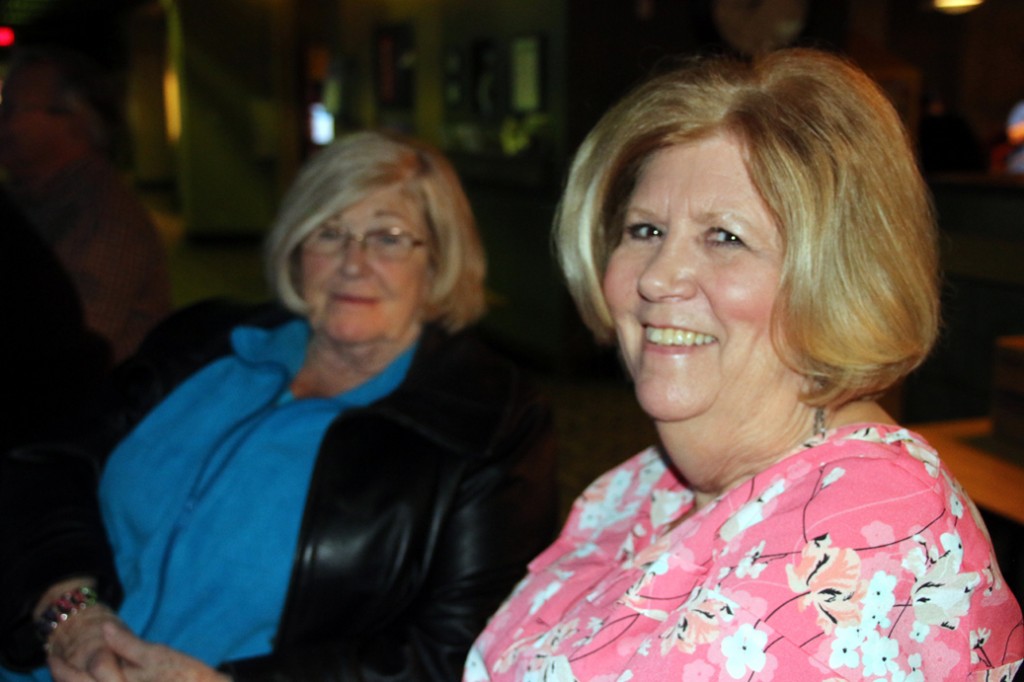 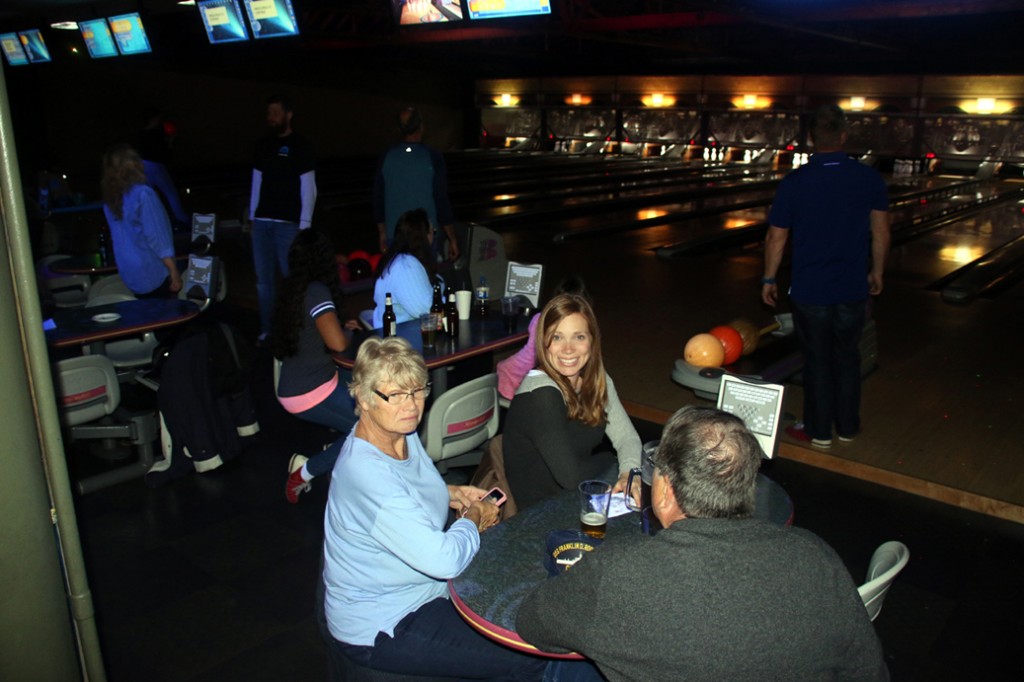